Two members of the Newport Rifle Club in Middletown – Portsmouth residents Michele Makucevich and her daughter, Danielle Makucevich – were part of an all-female team at the National Rifle Association National Championships in Bristol, Indiana, last month.

In Team Any Sights, the Lady Black Hawks were the only team to post a perfect score of 1,600 with a total of 131 center X bullseyes, besting the national women’s team record from 1981 by 16 points.

In Team Iron Sights, the foursome scored 1,599 our of a possible 1,600, eclipsing the Army Marksmanship Unit by a point and toppling a women’s team national record that had stood since 1976. The Lady Black Hawks won the Team Aggregate Championship, scoring 3,199 of a possible 3,200 with 246 dead-center bullseyes.

Danielle Makucevich, who attends the University of Akron on shooting and academic scholarships, was unable to compete because of an injury, but served as the team’s captain and coach.

Danielle and Michele also recently teamed up for the 16th straight year at the national Mentor Match, which pairs an adult with a junior shooter. The mother-daughter team can no longer compete in the event because Danielle, 20, is no longer considered a junior shooter.

Michele has coached the Newport Rifle Club junior team for more than 20 years. Fifteen former members of the program went on to compete in college and 16 have participated in the junior Olympics. 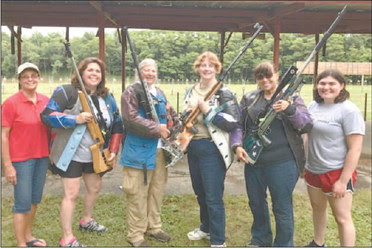